At pre-race check-in, the race director did a short slide show and showed us the unassuming dune. I thought, “I totally got this. I’ve ran 50k on the beach. I’ll be just fine.” Have you ever found yourself saying that last sentence?

Keep talking about it and just be about it already.

Have you ever ran on the the beach? If you have, you know that the footing is incredibly uneven.

The terrain in Atacama varies, there’s hard clay, crunchy dirt where your feet sink into the ground like you’re in snow, volcanic sand and the kind of sand I mentioned in my question.

Uphill at a 45-degree angle is a hell of a lot worse than your every day run on the beach. There are no foot holds and nothing to grab onto. It took me a quite a bit of doing to get up the sand dune. For every four steps I took, I only progressed two steps forward. It didn’t feel like I was making any headway. I wasted an incredible amount of energy going about it wrong. At first I tried walking straight up, but it was tiring and it felt like I was hardly moving. Then I watched as two other women ahead of me walked up sideways. You can see my sideways footprints behind me in the picture below.

It proved to be a success and I managed to finally make it up to the top of the mountain. It wasn’t that bad.

I followed the orange flag markers until they vanished.

I retraced my steps and looked for the flags. Where were the flags?

The sun was rising high above me and it started to get warm. It was getting warmer and the time was slipping away. I only had sips of water left in my hydration pack. Those damn patatas fritas had dried out my mouth and my phone had lost its signal when I reached the top.

I needed to get off this damn mountain and I wasn’t about to go down the way I came up. I had lost so much time already.

The flags disappeared halfway through the mountain. Thankfully, the top was relatively flat with sporadic giant-sized stalagmite looking rocks (like the one pictured below).

By this time, I was on my third try of retracing my steps. On one particular rock, I found myself staring up at a man and his goat. He was wearing a Peruvian poncho and was waving at me. Naturally, I waved back. At last, maybe he could lead me off the mountain. I got closer to the rock and the man and his goat disappeared.

I realized I was in serious trouble.

I thought about the things in my pack. A whistle. Who would hear me? A mirror. I didn’t know the first thing about making a fire, unless I had the aid of Google. A compass. Sometimes it would say my North was my South and vice versa. I didn’t have a map from point A to B, which would have been the one thing I should have carried. Instead, my life was dependent on finding those small orange flags.

The only thing I wanted more than anything was to end this “adventure” and see my children again. Before I left, I told my second daughter, “You know where my life insurance policy is?”

She laughed it off and said, “Mom, why would I need that?”

“Just in case. You never know,” I replied.

I didn’t want that to be my last words. I was not ready for my time to end.

On the fourth retrace, I kept walking forward. The other side was a steep drop off. Was I supposed to go this way?

You have got to be fking kidding me right now. I continued to cuss the race director out in my head. This was nuts. Then again, I was the one who chose to do this. I had signed the waiver with confidence. I had enough races under my belt to finish this desert run. My mind reverted back to the movie Lion King. Simba says, “Danger? I walk on the wild side. I laugh in the face of danger. Hahahaha.”

Yeah, it turns out that I don’t like adventures that may cause death.

I turned around and tilted my head where I saw the last flag. Since the sun was directly over them, it somehow hid them from view, but when I looked at them in a different angle, the flags started to appear…and they led me towards the steep drop off. Again, no footholds.

I made it off the mountain, practically scooting and sliding on the rocks and sand all the way down.

You can be prepared with every tool imaginable, but in the end everything can go wrong. Take a deep breath and follow your intuition. You’ll make it off your metaphorical mountain, but it may not be the way you imagined it. It never is. 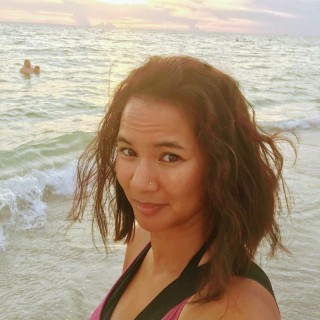